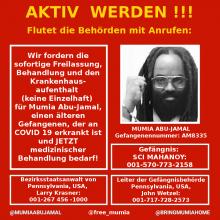 (This Can't Be Happening) Mumia Abu-Jamal, Now in His 40th Year as an Incarcerated Prisoner, Has Covid-19 (February 27, 2021) https://thiscantbehappening.net/mumia-abu-jamal-now-in-his-40th-year-as-...

Mumia Abu-Jamal—an innocent husband, father, grandfather, imprisoned radio journalist, "voice of the voiceless," political prisoner, award-winning author of more than 13 books, 66 years old with liver damage and high blood pressure—is experiencing chest pressure, labored breathing, and a marked change in the distinctive tenor of his voice. After political pressure through phone calls to officials, Mumia was tested for COVID and its antibodies. The prison reports that both were negative. However, officials are not always truthful about Mumia’s health condition. We remain very concerned about the causes of his current symptoms, which need immediate medical evaluation. We await direct communication from Mumia to further update his supporters.

Independent physician with decades of work in prison advocacy, Dr. Ricardo Alvarez, noted “Prisons are the physical manifestation of Racism. We have a simple cost-effective public health intervention in the face of COVID in prisons- release our elderly prisoners. Data shows they do not pose a public safety risk. Free Mumia! Free all elderly prisoners now!” Michelle Bachelet, United Nations High Commissioner for Human Rights, urges the release of " older detainees and those who are sick.” (https://bit.ly/3kFNWDc)

Mumia Abu-Jamal, a senior with serious pre-existing conditions, needs a battery of complex tests. These include chest X-rays, oxygen level testing, and medication to relieve the potentially deadly symptoms he is experiencing. None are adequately available in prison.

After 39 years of wrongful imprisonment—28 of those unconstitutionally held in the infernal isolation of death row—and after a near-death experience where medical neglect in the prison and failure to treat his Hepatitis C left him with cirrhosis of the liver, Mumia’s life is once again in the balance. He requires care at a facility where he can receive comprehensive and respectful and compassionate attention.

At least 100 incarcerated people have died of COVID in PA prisons. And “90% of inmates who died of coronavirus in 2020 were over 50 with likely pre-existing health conditions,” stated 32 PA lawmakers in a Feb. 8th letter to Pennsylvania Governor Tom Wolf. (https://bit.ly/3uH11AH )

At the start of the pandemic, Gov. Wolf promised to reprieve 1,800 prisoners but he has only granted 165 reprieves. Separately, 14 people sentenced to life in prison, mostly from Philadelphia, were pardoned to life on parole by Gov. Wolf on Dec. 19th. However, he waited until Feb. 12th to approve their releases, too late for Bruce Norris, 69, who died from COVID 19 on Jan. 30th. (https://bit.ly/3uLzsq2 )

It’s a fact that guards from rural COVID “red zones” are bringing COVID into the prisons. Meanwhile, those in prison are forced to live in their cells 23 hours a day. As a means of quarantine, those infected are held in “the hole,” causing many to hide their symptoms to avoid such punitive treatment. “The psychological stresses of social isolation and depression and anxiety on the outside are greatly compounded in the tortuous conditions of brutal incarceration,” says Demetrius Grant, imprisoned at SCI Albion. (https://bit.ly/381Htx3 )

We’ve learned of at least four prisoners who’ve died at SCI Mahanoy, where Mumia is held. Since the first known COVID death of an incarcerated person in March 2020 in Georgia, 2,445 have died of COVID. The real toll is unknown. (https://bit.ly/306CLK0)

Most governors have failed to decarcerate, failing to protect prisoners’ lives. Holding a captive population under these conditions is a crime against humanity. It is even more outrageous because excessive and draconian sentencing over the last 40 years means that many US incarcerated people have grown old serving life terms or 40-year sentences. In contrast, most developed nations limit sentences to 10-12 years even for the most serious offenses. Dr. Johanna Fernandez, Associate Professor at Baruch College remarked, “Ultimately we want a society in which social problems are not solved with carceral repression. Today’s reality has turned US prisons into cruel, old people’s homes for poor Black and Brown workers warehoused at the height of urban deindustrialization in the 1980s and 1990s when American capitalism could not employ large swaths of city dwellers.”

Aging people in prison are vulnerable to premature death if they contract the flu, cancer, hepatitis, pneumonia or now COVID-19. The only humane recourse is to let elderly and vulnerable prisoners go home.

Free Mumia and all incarcerated people over 50 in Pennsylvania and every state prison immediately!