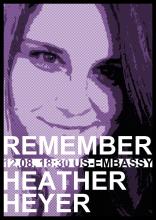 English Version can be found here within the next days.

Pariser Platz, in front of the United States Embassy in Berlin on 12 August 2019

On 12 August 2019 we want to commemorate antifascist activist Heather Heyer, and at the same time demonstrate against this worldwide shift to the right, against racism and far-right aggression, against the Trump government and its allies, from the alt-right to the Ku Klux Klan.

Heather Heyer, a 32-year-old US activist, was murdered by a self-proclaimed neo-Nazi during an anti-fascist protest against members of the alt-right, the Ku Klux Klan and other right-wing groups who had gathered for a march in Charlottesville, Virginia, on 12 August 2017. At the protest, the right-wing assassin James Alex Fields intentionally drove his car into a crowd of people, killing Heather Heyer and injuring another 19 individuals. In December 2018, Fields was found guilty of first-degree murder in Heather’s death. Remembering Heather Heyer is to remember all the people who have died as a result of right-wing hatred and of racist and nationalist policies worldwide. In this context, it is important to continually remember the sources of this hate. It is this hate that motivates perpetrators. And this hate has its sources in the seats of power, from which politicians spew anger at minority populations and are thus directly responsible for the violence and dying their daily aggression inspires.

The shift to the right and the increasing influence of fascism in politics and society are not a purely German or European problem – they are a global problem. Racism, sexism, transphobia and homophobia, anti-Muslim racism and anti-Semitism, the public expression of hatred and aggression against individuals and groups are all becoming more and more common on the Internet, in social media and in “real” life – and unfortunately, are also becoming more and more accepted. Whether habituation or secret consent, it makes no difference – large sections of society remain silent against this threat. Worldwide, people are dying every day from the direct or indirect consequences of such inhuman, nationalistic politics. Whether at arbitrary borders, fences or walls directly on our doorstep, in brutal detention centers in other countries, on beaches or far away at sea – the worldwide shift to the right has daily, fatal consequences.

Even in our immediate neighborhood, on the streets and in the cities right-wing hatred kills almost every day. Migrants, LGBTQIA* individuals, leftists or politicians who are a thorn in the side of the right – incidents of threats, violent attacks and even murders are increasing, yet seem to shock fewer and fewer people.

The United States has become just one example of a country where the rapid growth of right-wing hatred in society and politics as well as online has taken hold; and where the Trump administration openly works hand in hand with racists, Christian fundamentalists and radical right-wingers to neo-fascist groups, translating hate into nationalist, racist and sexist politics – thus providing the murderers at the borders, in the jails and on the streets with the political legitimization for their bloody activities.

On 12 August 2019 we want to commemorate antifascist activist Heather Heyer, and at the same time demonstrate against this worldwide shift to the right, against racism and far-right aggression, against the Trump government and its allies, from the alt-right to the Ku Klux Klan.