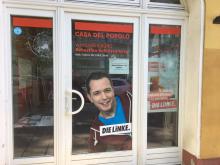 Late saturday evening, May 4, we commited an attack with stones against the store front of the office from Sebastian Schlüsselburg, member of the Committee on Justice and Secret Service, parliamentarian of „Die Linke“ in the district of Berlin-Lichtenberg. Most of its windows were smashed.

This is our direct answer to the latest events for which these political representatives of pure social-darwinism hold responsibility. To be mentioned first is the voting in the parliament of the district (BVV) Lichtenberg for the plans of construction of the stupid waterpark in the Rummelsburg Bay, which is another project for the city of the rich and tourists. This includes the eviction of homeless people, who squatted an area in the bay with their tents. It is clearly visible what role the leftist parties play in this process. After their usual approaches towards the resistance, finally ALL of them voted for the construction.

But our attack was also a revenge for the destruction of the small huts on Mariannenplatz in Kreuzberg, which left their inhabitants homeless. Imagine this: the only reason for this violent eviction was to create space for „Die Linke“ during the pro-government festival „Myfest“ on the 1st of May in Kreuzberg.

Finally we dedicate the attack to the resistance in the battlegrounds of Athens, where Syriza, the sister-party of „Die Linke“, confronts the self-organized and combative communities by launching waves of evictions against squats, especially those of migrants. On Friday, one of the evicted houses, Bouboulinas 42, was taken back by this movement. (https://athens.indymedia.org/post/1597546 )

When the state and the capitalists are fighting side by side, it is necessary to have a common struggle for freedom with our friends in Greece and everywhere.