In a highly regulated and secretive transport operation in the early hours of 29 July the Australian Nuclear Science and Technology Organisation (ANSTO) moved a shipment of spent fuel rods from the Lucas Heights reactor (near Sydney) to Port Kembla (in South Australia) en-route to reprocessing in France.

Long lived waste will be returned after reprocessing but the federal government still has no plan, process or place for advancing the management of this material. 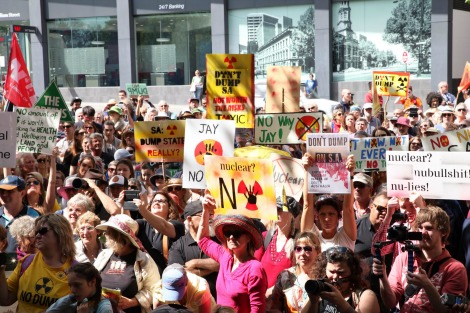 Below FYI and any use are media statements from the Australian Conservation Foundation and CCSA.

In relation to radioactive waste we need evidence based decision making that happens in the light - not ships in the night.

Once these spent fuel rods have been reprocessed, they will be returned to Australia for disposal. However, their final resting place remains a mystery.

The federal government is currently considering a National Radioactive Waste Management Facility (NRWMF) at two sites on agricultural land near Kimba on the Eyre Peninsula and one near Hawker in the iconic Flinders Ranges. All three sites are strongly contested by many in the affected communities.

Federal Resources Minister Canavan is determined to select a site by the end of the year, ahead of the next federal election. The issue is heating up with Minister Canavan touring the sites this week, there is a Senate inquiry underway into the selection process and a ballot to gauge community sentiment starting next month.

One of the many concerns held by those opposed to the proposed facility is the lack of detail about the waste that will be there. The plan is for the permanent disposal of low level radioactive waste (LLW) and for "temporary" storage of intermediate level waste (ILW). There is no clarity around how long the ILW will be stored at the chosen site nor is there a plan for finding a solution for its permanent disposal. Given that most of Australia's ILW comes from Lucas Heights many believe that it should be kept there, at least until a final disposal solution is established.

Moving this ILW twice increases the risk and makes no economic sense. The spent nuclear fuel currently en-route to France is expected to be returned to Australia as long lived intermediate waste mid next decade but its long term future remains contested and uncertain.

I've made a mistake about the mlocation of Port Kembla. It is about 100 kilometres south of Sydney, NOT in South Australia. Sorry folks.