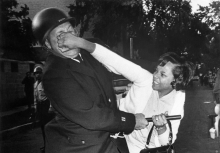 Recently, the Women Café from Prosfigika Squat published a self-representation (https://sykaprosquat.noblogs.org/post/2020/11/09/the-women-cafe/ ), which is taken as an opportunity to ask for more details about this structure. This interview was written with the intention of contributing to a discourse on feminist perspectives in Athens. The answers do not necessarily reflect the position of the entire collective.

Q.: How did you come up with the idea to create the Women Café? Was there a specific trigger for it?

- A.: In order to be honest we have to admit that the need came from a woman comrade new in the neughborhood, who tried to impose a feminist manifest to the women of the community. This had as a result the women to gather in the so called safe space (term that if you dont clarify it can lead to elitistic behaviors and it was not clarified) just for coffee and this woman comrade with another one, who was just for three weeks in the community, to make the political discussions apart from the social base of the community. This model created a gap of course so we decided (women that did not participate to the previous model) to create a bottom up structure. We did not want to find a theory and apply it to the women. We wanted our common meatings to create a common understanding about repression system. In the beginning we were five, but very soon we became more and more. especially after 2 weeks already one woman approached us and we got rid of the abusive boyfriend of her. This gave us a big boost but also some problems started. In order to be autonomous but not independant from the community we needed valid methods and community understanding. Still we are in this place.

Q.: Prosfigika has often been criticized that you have patriarchal structures. An accusation that goes from feminist circles to many groups in Athens. What do you say to this?

- A.: This answer comes from an individual of the Women Café. We dont have a collective opinion about it yet. I can say for sure the the needs of the women were forgotten in the big idea of the community. The Women Café brought us needs, that nobody new they were existing. Also of course there were many surface understandings about patriarchy. First when we say that we are equal, this does not mean anything. Second example is from the assembly, we were discussing about our women structures. Women structures were existing before the Women Café but when we asked our comredes what does this mean, they said that a woman structure is a house, that no men are allowed inside and only women stay. For us of course is much more than that. Also we have seen a competitive relation between the Monday Assembly and the Women Café. Sometimes we are criticized in terms of competition. They do not advise the Women Café, they just want to say what the Women Café is doing wrong. But in our last conversation as Women Café, we ended up in a conclusion that i believe is more helpfull for the community. We try not to be defensive when we take critics, because this way we reproduct the problematic behavior of some comrades. We want to be staedy and still to our propositions. All the structures in Athens are patrarchical, because they come from a patriarchical society. Yesterday i was in an assembly with 60 men and 10 women. I believe that in Prosfigika, they are clueless about woman structure but they have good intensions to give the space for this to happen.

Q.: Recently, violence against women has been discussed more often, also in other structures and meetings. I have the impression that this problem is perceived more than some time ago. But has the way of dealing with it also developed?

- A.: No i believe that the greek movement didnt find yet the answers and the tools to deal with this kind of incidents. Although i think that we have taken the space for this matters. Now is inside our everyday life. This kind of topics are discussed and no one dares to say that the people that are bringing them up are obsessive with sexism like they were saying in the past. So even though the tools are not found yet the collective thinking has changed in a way that a progress is starting.

Q.: How many women live in the community of Prosfigika? If around 30 of them participate in the Women Café, does this mean that the others are afraid to go there or that they do not trust this structure to solve their problems, or what reasons could prevent women from going there?

- A.: Also all the men do not participate to our structures. A big majority of the community does not participate and it is a bet for us to involve people from different countries and cultures in the community plan. Of corse some of them they do not trust the structure of the women, mostly because of the gossip existing in the smaller national communities inside the community. We try to brake this mentality with our gatherings to be stable, two times every week now, to have translations for every language. We even use google translate sometimes. I think more women will join us slowly slowly because so far, whever is coming feels safe in the cafe. I think, the biggest bet is to create a trust with the woman before you intervene in the house life. Otherwise you lose the woman also and trust can not be built in a day or two. Of corse some of them are bored to come and some of them were disappointed because we did not find fast enough money, they needed and they stopped participating. We were one week late to find money for an abortion and this woman was realy upset with us about it. I complitely understand how difficult it is, when the lack of money is creating traps in your life. I feel the frustration.

- A.: To be honest, the women that we started the Women Café did not even have a political experience about it. I have to admit that even the first woman comrade who started it, despite the fact that she tried to impose a theory top down and this failure left a gap in the community, i have to admit that she had an instict. This gap was that enforced us not to go to zero again, but to move in front. We were also clueless about feminim. We never thought our selfs in a structure like this. We worked with ourselves bottom up. But now i think that it is the most productive thing we are doing. There is an evolution all the time. Personally the Women Café makes me not to fear the police more than anything else.

Q.: What were the reactions in the neighborhood to your meetings?

- A.. I think everybody understood very fast how needed this structure is. They knew from their books but the everyday life creates another common understanding. We all thought that this structure could take some works from the Monday Assembly, but actually many more needs came in surface.

Q.: Do you discuss patriarchal power relations on the basis of individual cases, or as an appearance and precondition of the capitalist system and the state, both in the Women Café and in the general assembly?

- A.: The community is so busy that in general there is no time for many political dicussion in the General Assembly. We make this discussion in the Women Café, we wait for the debrief assembly of the community, to put all this problematics inside the new frame that will be created. The Women Café is very productive also because the space for political discussion already exist even though the problems of the women are so many that sometimes it is difficult to actually make a conversation there. It is a general idea about the common roots of our problems.

- A.: We created a method as a Women Café, that the assembly did not find the time yet to discuss. Anyway the general idea after the process, that i can not refer because is not ready (in general it has to do with comittes like working teams, they speak with both sides and they have common meeting and they bring proposal to the Monday Assembly) but it depends on the amount of violence. We do not hesitate to beat someone who beated his girlfriend. But we do it in a community way. First of all her speech matters the most. Second we are not a mafia. If we beat someone inside our community, he must be able to leave by himself. I believe this makes sense.

Q.: Last year, there were patrols of women in Exarchia to combat assaults in the neighborhood. However, this no longer takes place at the moment. Are there any plans to resume this or could this form of intervention also make sense in other neighborhoods? Or is domestic violence the bigger problem right now?

- A.: This period because of Corona we lost all the public spaces anyway. I think that this kind of patrols dont have any specific result and thats why they stopped. It is better to separate the demos from patrols. A patrol must happen with a specific target to work with results. Otherwise we have our demos and interventions. I dont think that there is any distinction between the two types of violence. We need our structures and maybe some general coordinations within all this groups to act effectively in any occasion. Specific plan after assembly for specific problem.

Q.: Have you ever thought about introducing a quota for entries in your neighborhood, for example limiting the number of men?

- A.: No never. In general though is more easy for the community to give rooms for single women or women with children. It iss more easy for us to overpass our bureaucracy for women.

Q.: Are there similar initiatives to yours in Athens and are you thinking about networking with other groups?

- A.: Yes a lot actually. A coordination with some of them would be a dream. We never had a discussion about this yet but it is not contradictive with our plan. Anyway our structure is open, so if women groups or comrades want to approach us, we always find space for them in our assembly.To close this interview I have to say that I am just an individual of the structure and maybe some opinions I express, dont represent the collective body. Im very happy that this opportunity was given to me, but in order to meet the women structure it is better to read our collective texts. The presentation one and the last text which we published against an abuser, that I hope it will be translated soon. We also have an email and we are very interested to any further propositions or questions. womenprosfygika@protonmail.com