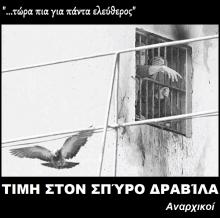 Living a dignified path under the most adverse conditions

The police operation in Nea Aghialos on 20.5.2015 was crowned as a “success”. The TV cannibals stand over our friend’s dead body and scream: Grigoris Tsironis, Spiros Christodoulou and the deceased Spiros Dravilas are ruthless robbers and blood-thirsty murderers.

Grigoris was and remains a comrade. From his first arrests, a result of his participation in the Polytechnic occupation in 1995 and the struggles against the regeneration of Exarchia square in 1997, up to his participation in dozens of dynamic interventions of the anarchist movement and his active presence as a worker in the courier syndicate, Grigoris was always by our side. A fugitive as of January 2006 after the expropriation of a National Bank on Solonos street, he lived ten years of battle and survival against capitalism and its repressive mechanisms.

With a bounty on his head since 2009 for the same case and targeted all these years, he managed to maintain his humanity and militancy despite the adversities and the hunt set up against him by the modern persecution squad.

Spiros Christodoulou was and remains an unrepentant proletarian who carved and carves his own dignified path under the most adverse conditions: prison and illegality.

Just like Spiros Dravilas… He had tasted it from the age of 21 when he first came into contact with the harsh reality of incarceration. Since then, with many years on his back as a prisoner, escapee and fugitive up to the age of 34 when he consciously rejected the lengthy deprivation of his freedom. He refused, like very few can, to see himself walking through those miserable corridors and cells of the correctional hell-holes, leaving the last years of an unsubjugated youth in the modern galleys.

SOLIDARITY TO THE ARRESTEES, GRIGORIS TSIRONIS AND SPIROS CHRISTODOULOU

FIRE TO THE PRISONS

Statement by Grigoris Tsironis from inside the cell of the 12th floor of GADA police headquarters, Athens

A cycle of 9 years of freedom in clandestinity closes perhaps in the worst way. With the death of our brother Spiros Dravilas. I want to express my warmest condolences and wish courage to his family. Spiros, now forever free, will always live in my heart and mind. Just like all those whose remain hunted in the uncharted paths of freedom. Keep strong brothers and sisters…

Concluding, from inside the cell of the 12th floor of GADA (Athens police headquarters), I send my greetings to the imprisoned comrades and I wish them freedom and to meet them again.

P.S. I would like to give my thanks and gratitude to those who all these years knowingly or not helped me and gave me moments of joy, happiness and comradeship.