von: AVAAZ am: 07.09.2018 - 06:41
Emailadresse:
avaaz@avaaz.org
Regionen:
Weltweit
Themen:
Biopolitik
Globalisierung
Ökologie
Repression
Abstract:
Dear Avaazers, Our hearing just ended, and the judge absolutely DESTROYED Monsanto's subpoena on Avaaz!!!! He said the subpoena would have a “tremendous chilling effect”, saying "no member would want to have their privacy and their activity known" and actually gave Monsanto a lecture on democracy and free speech!!
Vorschaubild: 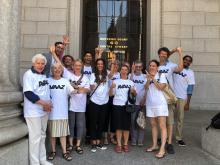 Avaaz members in the courtroom spontaneously broke into applause and huge smiles at his words. Here's a video from our Campaign Director Iain Keith on the steps of the courthouse: https://www.facebook.com/Avaaz/videos/458127264595784/

This subpoena was terrifying and would have had Avaaz spend months and hundreds of thousands of euros digging up and handing over to Monsanto everything anyone on our team ever said or wrote about them for YEARS. Including even the email addresses and identities of our members who had sent messages to officials about Monsanto!

Even worse, lawyers told us that courts in New York tend to AUTOMATICALLY GRANT requests like this! Because usually, more info means more justice.

But then our community got involved. Over 200,000 of us donated, and we hired the best lawyer in the business -- Andrew Celli, who has taken on cases like this before and won. He and his team worked with the Avaaz team to write a ridiculously great takedown of the Monsanto subpoena. It's long and legalistic, but if you speak that language, it's a thing of beauty -- you can read it here.

Monsanto flew in a top lawyer, a man who's defended everything from asbestos to lead and arsenic. But between our briefs, and the powerful oral arguments, the judge was convinced, and took the incredibly RARE step of throwing out the ENTIRE subpoena!!! Normally they just narrow the scope of the subpoena to something more reasonable, but the judge couldn't find anything reasonable in Monsanto's claims about Avaaz!

It's a moment to celebrate, but it may not be over.

Monsanto can still appeal, or come at us another way. But we've got an amazing win and precedent set, and an amazing legal team, and as ever, an amazing movement that will stand by, stand up, and speak truth to power when it threatens.

The purpose of these big legal attacks is to scare us. I have tears right now as I think about how, with the Avaaz community at our back, I really don't have to fear stuff like this. Because even the most powerful actors in this world, are not more powerful than the truth, than the power of good people coming together to work for everything we love, than the power of all of us in this incredible movement.

With immense gratitude,
Ricken and the whole Avaaz team.

PS - in another amazing example of our movement, an Avaaz member wrote in in response to our fundraiser, suggesting that the team reach out to Bayer, who are buying Monsanto, to ask them to drop this attack. He then took the initiative to write personally to both me and the CEO of Bayer. The CEO of Bayer actually called him hours later, saying he'd love to talk to me! So, we're talking on Monday. No idea yet what will come of it, but another example of the ridiculously wonderful movement that we get to be part of. Thanks so much to everyone for being you.

Avaaz is a 47-million-person global campaign network that works to ensure that the views and values of the world's people shape global decision-making. ("Avaaz" means "voice" or "song" in many languages.) Avaaz members live in every nation of the world; our team is spread across 18 countries on 6 continents and operates in 17 languages. Learn about some of Avaaz's biggest campaigns here, or follow us on Facebook, Twitter, or Instagram.