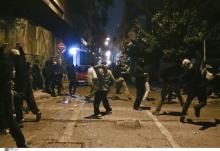 (Athens) In the morning of June 25, people gathered at Evelpidon Court to express solidarity to the people who were arrested the day before. The accusation against them is, hanging a banner on Lykavitos Hill in support of the hungerstrike of Giannis Michailidis.

Afternoon saw some interventions in Exarchia against shops and Airbnb buildings, which are the motor of the rapid gentrification in Exarchia. The development of changing character and residents by gentrification, relies on the offer to the new users and “residents” of the neighborhood. A process which took 15 years in Berlin speed up in Exarchia and other parts of Athens in three years. The infrastructure for tourists and new elites and their working and relaxing needs grows daily.

In the evening begun a gathering on Platia Exarchion to start the demonstration. A small group of Delta bikes passed through the crowed and nothing happened to them, just some shouting. May be they understood this as our weakness and they returned a few minutes later with more bikes, again driving in the crowed of some hundred people. The last enemy was grabbed and kicked from his bike and Delta instantly started throwing teargas and flash-bang grenades on the square. They received some items and were forced to leave.

This incident grew some tensions and the demo with around 1.000 people started to a shorter round in the neighborhood as was planed before. The demo was loud and spread a lot of flyers. When returning to Platia, people started building burning barricades on the corner to Stournari street, later in the whole area of Exarchia. This to prevent the expected invasion of police forces. After a while nothing happened, some hundred people moved to the street with the memorial of Alexandros Grigoropoulos. This move turned into an attack with molotovs on a MAT unit, which is guarding the PASOK office at the border to Kolonaki.

The result was a street-battle with more barricades and more teargas, traffic in the area collapsed. Although they were massively pelted with stones, police keept quite reserved. They only advanced when cars caught fire by molotovs.

After one hour it was clear, that the defense of Exarchia this night was successful and rioters as MAT disappeared and gave space to normal nightlife.

Politically, the defense of the neighborhood and the use of molotovs, despite stricter laws, was a success. The usual hostility of some residents to the clashes remained absent last night. More people understand the situation, expecting the horror of a five years long metro construction site in Platia.

But the reaction of the problematic groups, tourists and party people from richer parts of town, gives food for thought. Ok, some tried to flee in panic from the riots but many enjoyed the spectacle as a break from their boring daily routine. And some participated in stone throwing. The danger is great that Exarchia's resistant character as folkloric potential will contribute to its exploitation.

According to media, two people are arrested for the riots and one officer is in the military hopital.