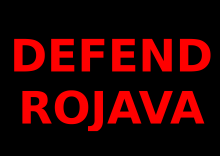 In Solidarity with the people in Rojava we attacked turkish fascists and war profiteurs in german cities. Some of the attacks we put together in a mobilisation video for the campaign against turkish fascism and to defend Rojava! it is only a small sign compared to what the revolution has given to us.

Since April 14, 2022 the fascist AKP-MHP government has been carrying out a military campaign against areas of Bashur (Iraqi Kurdistan), with the main objective of hitting the forces of the Kurdish Liberation Movement (PKK) and, at the same time, deepening its plan to occupy Kurdish territories and annex them to the current Republic of Turkey.
On May 23rd 2022 Erdogan announced that Turkey will launch a operation to create a 30km deep “security-zone” on it’s southern Border.

In turn, the government of Recep Tayyip Erdoğan continues to bomb cities in Rojava, and cities such as Kobanê, a symbol of the resistance against the Islamic State (ISIS), particularly.

Erdoğan’s government has made it clear that its expansionist policy will not stop, even if this implies the violation of international laws and the territorial sovereignty of other countries.

The revolution is in danger! For June 11, there is a call from Abya Yala (Latin America) for an international day of action (https://defend-kurdistan.com/kurdistan/against-the-war-in-kurdistan/). In addition, as in 2019, there is a Day-X call for action in case of a new Turkish invasion (https://riseup4rojava.org/no-war-in-northern-syria-day-x-mobilisation/).