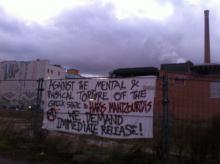 The Greek state is trying by all means to make files and create cases based on the DNA bank so they can eliminate as many of us as possible in order to save and preserve  their plans.

But we have plans of our own.

In October 13, 2021, the Greek state, through the police and specifically the department of crimes against property, abducted the comrade Charis Mantzouridis in front of his house. The cops surrounded him on the pretext of bringing him into the Police Headquarters of Athens, because, according to an “anonymous” (sic) telephone call he was a suspect for robbery. They cuffed, beat and chocked him in front of his companion and their three year old child and the stunned neighbors. From that moment onwards, the procedures went fast, proving that the case was rigged in advance and that the police organized a frame-up to fabricate guilty people. Charis Mantzouridis was accused for a robbery that took place in 2018 in Zografou area (Athens), based only on a DNA mixture found on a clip located close to the robbery site.

Almost all persecutions involving DNA are based on mixtures of biological material located on movable objects. DNA alone does not constitute proof because even when a sample is fully identified with one person, transferring this sample has been scientifically proven as dramatically easy. Therefore, it is clear that the presence of DNA at one place does not imply the presence of the person there. Furthermore, in cases where militants (or others) are persecuted, the evidence is mainly mixtures of DNA from two or more people, which basically mean countless potential combinations from which multiple DNA types may easily result.

The police are aware of how questionable and unreliable DNA is as sole evidence. That is why they played the “terrorist” card to achieve our comrade’s pre-trial detention. All mainstream media spread the authorities’ version of the story describing him as a dangerous anarchist terrorist, while the police included in his brief one more DNA mixture, once again found on a moveable object (glove) discovered two blocks away from where an arson at a car dealership took place in 2009.

Shortly after he was detained Korydallos prison, Charis was heavily injured in the head during a panic attack. He was immediately transferred to Attiko Hospital where his mental health got deteriorated so he was transferred to Dafni Psychiatric Hospital. After receiving medication he showed signs of improvement and his transfer back to Korydallos was decided.

The suffocating pressure inflicted by the police and his imprisonment without evidence triggered an outburst that intensified and continues to affect our comrade’s mental health. We are well aware that the main responsibility lies with the state mechanism, meaning the capitalist system in general, and its institutions, the cops, the judges and other custodians of power.

We demand our comrade’s immediate release to put an end to this ongoing torture he undergoes!!!

No one is free until we are all free!!!

Solidarity with Charis Mantzouridis from Berlin!!!