Solidarity to Liebig34 from Community of Squatted Prosfygika Athens 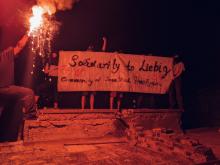 It makes us angry to hear that our comrades of Liebig34 faced an attack of unprecendented scale by authorities and real estate mafia today.

We know that the state, despite all of its lies to the contrary, will never defend marginalized and opressed people, but instead repress them with an army of cops. Within the 30 years of its existence, Liebig34 for 21 years tried to be a safe heaven for women and trans-people, one of the very few places as such in Germany. In times of a massive surge of right wing ideology and patriarchical politics all over Europe it is needed more than ever before. We should continue and extend the fight for liberated spaces despite these setbacks.

In Greece and Germany as everywhere the state attacks projects of struggle not only because they are an obstacle to gentrification and exploitation, but more also because they are real barriers to their plans creating a society that they can control and exploit.

Since we share the same difficulties we think it’s responsible to deepen our international connections in the fight against patriarchy, state and capitalism. Therefore we support the call from Terra Incognita and Interkiezionale for an offensive month of international solidarity.

Solidarity to everyone who has been arrested in the fight!

- NO STEP BACK IN THE FIGHT AGAINST STATE AND PATRIARCHY, COMMUNITIES OF STRUGGLE EVERYWHERE!