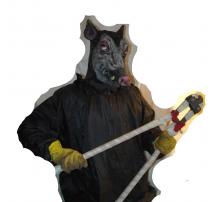 26.02.2020: Tonight, we removed 22meters of the fence along the Denmark-Germany border near the village Ellhöft (Ellehoved), the nature reserve “Schwans- und Kranichmoor” and the region Töndern (Tønder). We placed some dismantled elements of the fence in Flensburg (Flensborg), Süderlügum (Sønder Løgum), Ellhöft (Ellehoved) and Kiel. Attached to it are information about the wild boar fence, its nationalist and racist symbolic character and the problems caused by pig farming. We bring forward why a world without borders would be a better world and show photos of other borders. People passing by can also read which animal species are particularly affected by the ecological consequences of the barrier. We invite all people to make up your own mind of the action.

National borders are becoming increasingly fortified, monitored and militarized around the world and across Europe. Recently, a fence was put up along the Denmark-Germany border. Its purpose is officially to stop the spread of the African swine fever to protect the Danish pig industry. But what makes the pig industry vulnerable to the disease is factory farming and that the virus spreads rapidly through long transports of meat and animals. Apart from the fence being useless for its official purpose, it creates a dangerous barrier for the local wildlife and enforces nationalistic ideologies.

By taking down the fence, we want to encourage everyone to think beyond national borders and move across them as if they weren’t there. We as a society and resisting people cannot let restrictions such as this symbolic fence stand. Get your screw wrench (size 10), a bolt cutter and join in! Together, we can tear down border barriers, switch off surveillance cameras at the official crossings and protest against racist controls. We have to stand by thosewho are at greater risk and facing violence, like the refugees trying to cross the Serbo-Hungarian border who were threatened with shootings just two weeks ago. We have to question what borders are meant to protect - be it allegedly superior values or economic interests. Although people in Germany and Denmark eat less meat these days, the animal industry is still growing. It causes nitrate pollution and damages the climate of Earth. Of the pigs which are slaughtered in Germany and Denmark, almost 20% in Germany and around 90% in Denmark are killed for export. Much of the meat goes to China. The pigs are crowded together in increasingly large farms. As long as they suffer from a lack of space, sometimes lying in their excrements, incapable of standing under their excessive body weight, exhausted, with weak immune systems and fed preemptively with medication, no fence can prevent epidemic outbreaks. Even the FLI (Federal Research Institute for Animal Health) points out that the main risk is human behavior. The virus is carried hundreds of kilometers in dead bodies of infected pigs, for example in raw sausages. It sticks under the soles of shoes and in the grooves of car tires and it can be introduced by hunting tourism.

Furthermore, the location of the new wild boar fence is rather odd: There are almost no wild boars in the region. At the time when the Danish Parliament decided to build the fence in 2018, infected pigs had never been found within 700 km of the border area. But if transmitted directly (that is from wild boar to wild boar), the virus can only spread up to 20 km a year.

In contrast, the symbolic character of the fence perfectly matches increasing agitation and hatred towards migrants. Since 2016, border checks are carried out on all major northbound roads. These checks were officially announced as only temporary, but have become even more severe since then. Identity checks are also carried out randomly (which means based on racist criteria) on buses, trains and at ferry docks. Around 30 to 50 people are rejected to cross the border every week. Armed soldiers have also been deployed at the checkpoints since 2017. Added to this were the automatic video-scan of all license plates at every road crossing the border, irregular checks by the police both from police cars and civil cars, and monitoring from the air.

Therefore, the idea of closing the Denmark-Germany border with a fence must have risen from nationalist fantasies. The underlying mindset turns out to be deeply racist: Immigrants from certain parts of the world are not thought of as or treated as people. Danish nationalists want to exclude them with a fence designed for wild boars. The last government had plans to isolate unwanted refugees on the tiny island of Lindholm. So far, the island is closed off because it has been used to research dangerous animal diseases with infected animals. The ex-foreign minister Inger Støjberg (asshole) wanted to make the living conditions in the planned deportation camp "as unbearable as possible".
As the countries of the world seal themselves off, ecological problems are growing that can only be solved together across land and ocean. In fact, fences are an ecological problem in many ways. Worldwide, the distances that animals travel are more and more restricted: by roads, railway lines and national border barriers. If animals cannot migrate, this prevents genetic exchange and makes them sick. Some need to migrate seasonally or wander to adapt to climate changes. Thereby, they transport plant seeds and biomass.

About eight km east of where we have removed the fence, there is a small forest on both sides of it. The nature reserve “Schwans- und Kranichmoor” is a few kilometers to the south. Deer are often seen in the surrounding fields. At the border-parallel ditch called Süderau (Sønderå), footprints testify animals crossing here. They are not used to being disturbed by the sociopolitical border. Near here, none of the holes for hedgehog-sized small animals can be found. Only 20 of these small holes are distributed over 70 km of fence length. Several deer and a red deer got injuries because of the fence. The barrier can also have a problematic effect on otters, foxes, wolves and golden jackals.

The people who live here resist through art, petitions and demos.

We find it logical to remedy the € 8 million "material damage" ourselves!
For freedom of movement for all (beings)!