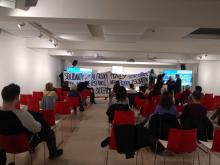 Tuesday 15 November 2022 we interrupted with banners and speech a conference about Italian language at the Italian Institute of Culture.

This institution  is created by the Italian Government to support the work of Italian Embassies and Consulates. The specific one in Berlin is located in the same building (or fortress) of the Italian Embassy and Consulate.
We wanted to show solidarity with Alfredo Cospito, anarchist prisoner detained in complete isolation in Italy (41bis). The Italian state is psychologically and physically torturing Alfredo and more than 700 detainees who are subjected to this regime.

In addition, Alfredo risks a sentence of life imprisonment without the possibility of parole for an attack against the Carabinieri school in Fossano for which he is accused . For this attack, which despite the fact that it caused neither deaths nor injuries and only no serious material damage, Alfredo was charged with political massacre (massacre against state security) a sentence that as a punishment provides only life imprisonment.
Against 41 bis and against life imprisonment without the possibility of parole, Alfredo has been on hunger strike since October 20, and will continue until he will be free from 41bis. Other prisoners, Juan, Ivan and Anna started as well hunger strike in solidarity with him.

On November 23 there will be a gathering in front of the Italian consulate and from there will start the demonstration, we invite everyone who wants to show solidarity with them to come.
We also want to remind you, that on December 1 there will be the re-examination of the 41 bis measure against our comrade.

An attack on Alfredo is an attack on all of us, on our ideas of freedom and for a radical change in this society.