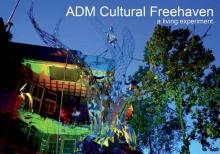 ADM is a cultural free place in the harbour of Amsterdam. This huge community is currently seriously threatened with eviction by the owners of the terrain, who claim they have signed a rental agreement with the business Koole Maritime, which starts out on October 1st. 2015
Three (!) separate legal procedures have been started against the inhabitants and users of the ADM in the past months.

Today, Kole Maritime started for the second time a road building action in front of the terrain. Before they could be stopped, as they didn't have enough legal evidence to carry on their action, they unfortunately destroyed a lot of nature, that has been growing wild for many years.

This acrticle includes a protocol of the action by one of the inhabitants of ADM, as more info about the ADM and situation.

Support us by signing our petition that urges the mayor of Amsterdam to intervene
Go to: adm.amsterdam/petition

a protocol of an ADM inhabitant being present&filming the action today:

'Koole Maritme bv brought their excavator to the ADM at 6 AM on Monday, August 17th. 2015.
After offloading the excavator they started immediately with demolishing the nature in the front of the ADM terrain in order to construct an emergency road.
On this terrain it's established, even by their own nature survey bureau that this is the habitat of endangered natterjacks.
At first Rick (the team-leader for Koole) was willing to stop with the works until D. (ADM) arrived with the papers from our nature survey bureau, but in the end he concluded (since we didn't have the authority to stop this, in his mind) that he could go on.
After one hour or so the police finally arrived with two cars, but all the police-man and woman didn't see the need to stop the actions of Koole
Finally after another hour or so a more decisive police officer arrives and after much discussion he finally realized that Koole was operating illegally, since the actual go ahead from their nature survey bureau (Waardenburg) was non existent and he froze the situation
Earlier on in the process A. (ADM) tried to stop the excavator by standing in between that machine and the trees, but he was deliberately picked up by the excavator driver with the "beak" of his machine, lifted three meters in the air and thrown aside. Unfortunately this was not captured on film.
When we confronted the people of Koole with this incident, when the police was present, they didn't want to reveal the name of the excavator driver. He tried to sneak away and was followed by me, the camera person. The Koole person in charge, Rick, took the camera away from me, but the camera was taken from him by the police and returned to me with the message that it's totally legal to film
In the end a public relations woman of the Amsterdam harbor Company showed up claiming that Koole had gotten all the necessary permits through the harbor company, which is totally false, since the harbor company can't issue any permits
This day was concluded by the police saying that the case was now officially transferred to the neighborhood police supervisor and that he was going to investigate everything'

The Cultural Free-haven ADMamsterdam is currently seriously threatened with eviction by the owners of the terrain, who claim they have signed a rental agreement with Koole Maritime, which starts out on October 1st. 2015
Three (!) separate legal procedures have been started against us, as of yet
==================

The Cultural Free-haven ADMamsterdam is currently seriously threatened with eviction by the owners of the terrain (Amstellimo BV and Chidda vastgoed BV) owned by the heirs of the infamous and mafia related real-estate speculator, Bertus Lüske
They claim to have signed a lease with Koole Maritime BV, which starts out on October 1st. 2015
They summoned us to leave before August 1st. 2015 (and to take everything with us!), or face a fine of 50.000 euro's for every day after this date
Three (!) separate legal procedures have been started against us, as of yet

Around 130 residents, ranging from 0 to 80, are currently living between hope and fear
For almost 18 years we've been creating a sustainable community, turning an abandoned and derelict shipbuilding-yard on the outskirts of Amsterdam, into a life laboratory and oasis for the free-spirited and thinkers, in co-operation with the nature around us, by our own means, and with no single cent of subsidy

All over the terrain there are various protected bird species, mammals and wild-flowers to be found, (So far officially established: natterjacks, bats, owls and orchids)

We also support and perform at various other festivals and events in the Netherlands, Europe and the world.
From Oerol to Fusion (DE) and BurningMan (USA) and from RollendeKeukens to TerraMadre(IT) and Macau (HongKong)

Support us by signing our petition that urges the mayor of Amsterdam to intervene
Go to: adm.amsterdam/petition

There's no (main-stream)culture without sub-culture!
Stop the speculation with the ADM-terrain!
The ADM belongs to the people!

More info about us: adm.amsterdam

Thank you for your support!