[B] #R1MB Evaluation of the anarchist Block 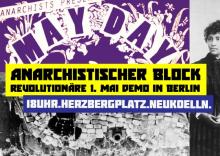 Following an open call this year a  coordination of anarchist groups and individuals organized the anarchist block that was part of this year's #R1MB Demo. Some of us formed part in the open assembly from the beginning, some joined to support the structure of the block, shortly before the demonstration. As such we want to share our reflections on the political process that took part, on the coordination with other groups in the alliance for the #R1MB, and on the demonstration itself.

We  called for a joint anarchist block were different expression of rebellious could come together. During the process ww find ways to be open towards one another and confront the differences among us. The structural dominance that we still reproduce on our structures and upon we must react collectively. Agreeing to disagree and respecting that even when we use different ways, we have a common fight

The assembly was a space for political exchange, that included content discussions between the very different notions of anarchy that were brought by the people attending. One of the prospects of such a process was to create a block in which these different notions could be brought to the streets. Not by unifying our ideologies but by an understanding that we need to work on the acknowledgment of our difference, joining an active fight for freedom. We had very interesting discussions and forged new connections between us, that might well find their way into a regular anarchist assembly, and will give us strength and even new company when dispersing again into our daily struggles.

Some topics did not receive enough discussion during the process, for example: How do we mobilize for the demo/block, what channels do we use, what content do we spread? It is our experience that when a topic does not get discussed explicitly we automatically fall back on standard options and do 'business as usual' (in this case: mobilization through posters in known kiezes and texts on IM/kontra with little content/explanation why people outside the scene should join the demo). We also missed the opportunity to inform publicly about the ongoing process because no one felt responsible for the task even though it was proposed.

Expression of the block

The fruitful differences in between us, translated into a bigger than expected block, that far from being a black block was composed of a diversity of groups and people. We heard of comrades and friends coming from very different struggles, that joined the block. Even though there was also space for connection and strength, as we heard, patriarchal behavior was reproduced in our block. We think a certain way of coming together (black block) doesn't need to recreate egocentric or aggressive behavior towards one another and hope that we learn again collectively.  Black block is an act of solidarity. Covering our faces is a way of collective care.
The self-defense of the demonstration against attacks from cops was an important issue for us. People actively defend themselves and the block against attacks. We also want to highlight the spontaneous solidarity of people who were not part of the block. They often stood in between the rows of cops and the block and restricted the possibilities of cops to control and attack.

At the same time, we heard that the political expression to the outside was not always that clear. More banners and signs with political statements would have been good to have a clearer message to the outside. However we do not think that we should be the only ones providing a political message within the block. Our invitation was from the beggining to build something together and not merely to follow those walking in the front. in this regard we would like to share our reflection about a sort of consumerism behavior we see in us as movement - of joining political space without bringing  one's own voice and initiative to the demo.

In this regard, we also discussed the showing of middle fingers towards filming people. While we share, that filming in demonstrations is highly problematic, especially as it helps the repression forces but also for the atmosphere of spectacle that it creates, we don't think that insulting solidaric bystanders is the proper reaction, especially on this occasion, in which cameras were omnipresent. How to deal with filmings on such big demonstrations as mayday should be part of a broader discussion, and several proposals were made for next year to create more general awareness about the issues it entails.

Even when we see that this behavior was not transporting our political position aginst filming, we are convinced that we should as a movement have a more radical position and praxis against the practice of filming and our presence on social media platforms. We find it extremely problematic that we just take for granted that our actions will be filmed and posted by others, instead of increasing our fight against digital surveillance and  the mediatization of our lives. The fact that people are cooperating with repression structures, by providing material that the state uses as "proof of delict", should be further problematized. Particularly mayday videos and pictures provided on social media have been a big source of repression -  utilized for persecuting structures and comrades. Therefore we cannot see the act of filming as a solidary one, but on the contrary as an act of indirectly policing each other.
Furthermore, we acknowledge the lack of discussion about what an autonomous decision about the usage of our image and personal life means to us. And reject the idea that we can constantly be obliged to be perpetuated in the digital world via  social media post, security cameras,  gps trackers and more.

During the demo, some of us realized that anti-deutsch slogans were shouted from inside the anarchist block. In one instance people screamed: "against all antisemitism" while a speech of Palestinian comrades was being held. While at this moment we did not manage to stop this from happening, we say now clear: anti-deutsch positions should have had no space in the anarchist block! As we posted in our call before, we share a clear anti-colonial position, that we are in full solidarity with anyone fighting for freedom and self determination. This means a full rejection of any positions that seek to silence the voice of palestinian comerades.
We want to express our solidarity with all the Palestinian comrades, whose demonstrations have been forbidden in Berlin in a time of increased aggression by the state of Israel. We share our grief over the ones killed in the occupied territories. Solidarity is important and by joining our voices together we can manage to overcome the repression by any state.

As usual the cops and Springer's press are agitating hand in hand. This time, not only are attacks against the demo legitimized in advance, but the personal data of the person registering was also passed on to Springer by the cops. This attack hits us all! Back then and today: Expropriate Springer!

The block formed a bit later than the internationalist and the Klassenkampf block, in the beginning, there were not a lot of people present. We know that a lot of people joined last minute also because of security reasons, as they did not want to be exposed to civil cops and cameras. This raises the question for us, of how to adapt our strategies when we commit to being part of the larger demo and its schedule. The front part between the banners formed a black block, while the back of the anarchist block was more "colorful".  When we started walking, we were happy to see how many joined us to protest together and the block grew a lot.This posed some structural difficulties that were resolved spontaneously to adapt to the size. Also some people joined the front part of the block, which did not cover their faces and were maybe not prepared for the dynamics in this part of the demo. How to create a culture of self-care and self-protection without being exclusive is something that we have to continuously work on. Some also questioned if a black block is a right strategy for this day. As a lot of people mix in anyways and not all of us wanted to participate using that method.

The first attack by the cops happened on Sonnenallee. People formed chains and resisted actively the attacks, by this stopping the cops from crashing the block.  Our hearts were warmed by the solidarity from the internationalist block, that not only stopped to show solidarity but their last rows came to our support, to resist the attack. After the attack, we managed to re-establish the row structure.
From Sonnenallee on, the cops tried to establish a cordon, first on the left, later when we turned into the small streets on both sides. The cops were often hindered by solidary bystanders that walked between the banners and the police. This changed after Kottbusser Tor when we walked into the prepared kettle. The police around us started to push us closer and closer until eventually, they smashed the demo in O-Platz. The cops had prepared themselfes, putting stadion lights and closing the surrounding streets. When they attacked they used pepperspray and ran into the block. At this point it became impossible to maintain the rows.  Unlike some other political positions,  we think it was politically the right decision to finish the demo and not dissolve it before. We also see that the situation at O-Platz was very much managed by the police with few possibilities for us to counter the cops' strategy. This gave them a lot of space for arresting people, which we should carefully evaluate to avoid this situation in the years to come.

Growing the seed of resistance

Overall most of us had a positive feeling about how things went, especially the political process between us. We strengthened our connection and exchanged different points of view. We had many political discussions which pushed us outside of our comfort zones. And this created a visibility of the existing anarchy, both in the discussion and on the day of the R1MB itself.

That said it was a problem that although many people joined the meetings in the beginning and directly before the demo, some of the meetings in between had only very few participants. In future years we encourage people who commit to the process in the beginning to show more consistent support throughout the time. Sometimes we missed people and resources exactly when these would have been most important.

It has not been always easy for us to fit into the broader alliance due to some key political differences. Anyways, we think that the process was worth taking part in. A lot we talked in the alliance about solidaric responses to attacks by the cops, but it did not stay with talking. The structure of the demo as well as the participants of the different blocks showed solidarity and resisted with us against the cops' attacks.

This process emerged out of an open call and during we were consolidated as an open assembly, that was open to participation. The experience of organizing for the block together, the bonds of trust and affinity that were created, made us wonder whether to start a new intent of creating a space where we as anarchists can regularly meet. A place to coordinate our struggles and to foster the relationships in between us. An open assembly for the coordination of anarchists struggles in Berlin.

Fighting together creates the trust for future cooperation, continuously learning from each other, and creatively finding new ways of putting the system of property in danger.