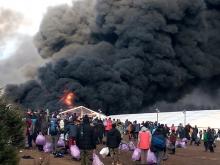 Two days ago, on the 23rd of December, the Lipa camp near the Bosnian border town of Bihac burned down. The organizations No Name Kitchen, SOS Balkanroute, Medical Volunteers International e.V. and Blindspots urgently call for evacuating the People on the Move and ensuring immediate aid in the region.

Two days ago, on the 23rd of December, the Lipa camp near the Bosnian border town of Bihac burned down. The organizations No Name Kitchen, SOS Balkanroute, Medical Volunteers International e.V. and Blindspots urgently call for evacuating the People on the Move and ensuring immediate aid in the region.

Today, on Christmas , thousands of people are homeless. Elementary basic needs of safety and warm shelter, hygiene, nutrition as well as medical care are not guaranteed for People on the Move here and in the region.

Lipa was a camp not ready to give a decent acommodation to people. After longtime with no agreeement about what to do with the people living there, the only alternative given before this fire, for this humanitarian crisis was to take them to another camp, called Bira and which is located in the city of Bihać. So the International Organization for Migration (IOM), who was managing the Lipa camp, wanted to transfer people to this camp. However, according to observers, concerned citizens as well as fascist groups blocked the access roads and prevented the IOM buses from entering, claiming they do not want another camp in the city.

After the Lipa fire happened most of the People on the Move tried to reach Bihac on foot yesterday but were again blocked by the local authorities. A few months ago, they have tightened the repression against People on the Move, as well as against people and structures that support them with food and clothes.

At the moment, there is no back nor forth – it’s a dangerous blockage that puts in risk people's health. So, today on Christmas , these people have neither access to camps or any accomodation, nor to solidarity structures in Bihac at their disposal or no right go to shops in the city and buy their own food or clothes.

The European Union and its member states share the responsibility for this catastrophe. By not taking action they accept the physical and psychological suffering of these people. People on the Move are forcefully blocked without access to basic needs. They need solidary support on the spot and long-term perspectives.

The European Union with its so called "values of solidarity" has been failing for years when it comes to dealing with migration. On a European holiday like today, the contrast between our privileged way of life and the bitter reality at our external borders becomes particularly drastic. There is no solidarity. There is no humanity. There are no human rights.

We as activist, No Name Kitchen, SOS Balkanroute, Medical Volunteers International and Blindspots are today united and demand:

• European Union should take a human decision regarding the borders. Camps are patchs, not solutions