(Nuremberg) A spark in the night 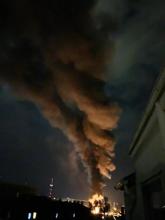 In the dark night of saturday we sparked a huge fire despite the massive presence of pigs in Gostenhof, Nuremberg. We used simple resources to turn tires and palettes into an enormous pillar of smoke in the night sky. It was visible from any angle of the city of Nuremberg.

In the last weeks Jamnitzerplatz, the central gathering place in the left neighborhood of Gostenhof, became a hotspot of police raids and attacks against residents, left youths and migrants. With our fiery contribution we disturbed the ongoing state of siege around Jamnitzerplatz. Our fire caused a confusing situation for the henchmen of the state. The special forces on duty (riot police USK) were forced to stop their well-prepared operation this night. The people of Jamnitzerplatz were able to breath freely for some hours in this mild summer night.

We can not swallow our anger at the constant state of siege anymore. We decided to intervene against the disgusting oppression the last weeks and our whole lifes. We will never accept the system, the theft of our freedom and the destruction of our living spaces.

We hope our spontaneous act inspires other individuals to burst their chains and take action.

Let us fuse the lit of a worldwide resistance. Let us fight for total freedom.