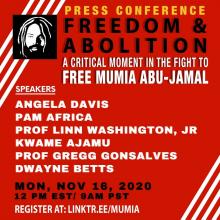 Virtual Press Conference: Angela Davis, Pam Africa, Dwayne Betts and many other advocates Demand an immediate release of Mumia Abu-Jamal and End to the PA Supreme Court Investigation of an Alleged Conflict of Interest by Philadelphia District Attorney Larry Krasner

These thought leaders and advocates support a decades old international movement for justice for Mumia Abu-Jamal and are seeking to end the investigation proceedings ordered by the Pennsylvania Supreme Court.

Philadelphia Common Pleas Court Judge Leon Tucker ruled that Mumia is entitled to reopen his appeals filed over the course of almost two decades which were denied by a Pennsylvania Supreme Court judge with a conflict of interest. In his ruling, Judge Tucker wrote in his 36-page opinion that under U.S. Supreme Court precedent, “if a judge served as a prosecutor and then the judge, there is no separate analysis or determination required by the court, there is a finding of automatic bias and a due process violation..”

Despite this ruling, the Pennsylvania Supreme Court’s intervention continues to deny justice by accepting the rarely granted King’s Bench Petition and called for an investigation of claims made by Maureen Faulkner. Ms. Faulkner is the widow of the fallen officer that Abu-Jamal is wrongly accused of killing. The petition asks for the removal of the Philadelphia District Attorney’s Office and District Attorney Larry Krasner from the case because of purported conflicts of interest.

In this moment of racial reckoning in criminal justice system abuses and the way they destroy the lives of African American people, it is time to revisit the injustice in this case, starting with another chance at appeal.

There were over two dozen constitutional violations – including prosecutorial misconduct and police malfeasance which led to the conviction of Mumia Abu-Jamal.

On February 24, 2020, the Pennsylvania Supreme Court issued an order staying all pending matters related to the case, Commonwealth v. Wesley Cook, a/k/a Mumia Abu-Jamal, No. 290 EDA 2019; CP-51-CR-0113571-1982 pending further action from the Court. It is now nearly nine (9) months later, and the Pennsylvania Supreme Court has not ended the stay. The stay was based on Maureen Faulkner’s petition.

This stay is preventing attorneys for Mumia from proceeding to follow through on the appeal granted by Philadelphia Common Pleas Judge Leon Tucker on December 27, 2018.

Justice delayed is justice denied. In other words, if relief is available to Mumia in the form of a chance to appeal and overturn his conviction – but is not forthcoming in a timely fashion, it is effectively the same as having no remedy at all.

Mumia Abu-Jamal should be immediately released from prison for the following reasons:

·      Judicial bias tainted his original appeals in this case, as ruled by Judge Leon Tucker.
·      Black jurors were systematically excluded from the jury pool; therefore, the jury did not reflect a fair racial breakdown based on the population in Philadelphia.
·      There are substantial claims of prosecutorial misconduct in this case.
o   Coercion of witnesses.
o   The failure by the prosecution to turn over all available evidence.
o   Perjured testimony.
o   Four witnesses identified a fourth person at the crime scene as the shooter. The presence of that person, exculpatory evidence, was suppressed by the prosecutor at trial.
o   The use of evidence which the prosecutor knew, or should have known, was false during the trial.
·      There are substantial claims of police malfeasance in this case:
o   The officers in charge of collecting evidence at the crime scene were subsequently jailed for extortion, corruption and evidence-tampering.
o   A third-party took photographs of the crime scene which corroborate the eyewitness testimony of the presence of a fourth person, show police tampering with evidence, and disprove key points of the prosecution’s case.

Mumia Abu-Jamal: Mumia Abu-Jamal is a father, husband, journalist, and author who has been held captive as a political prisoner in Pennsylvania for almost 39 years. He has always maintained that he is innocent.