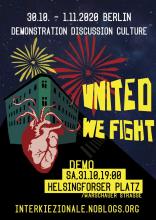 In the last few years we have seen how Berlin is changing through the process of gentrification that expels us from our neighborhoods, through evictions (5.000 per year), rent increases, making life unbearable and increasing policing of public spaces. In the end, gentrification changes the social geography of the city. Furthermore, the Berlin Government sells the city as „alternative“, while simultaneously evicting us from our politicized spaces of interaction, coordination, creation and subversive lifestyle. The city is being sold to capital; used as a touristic attraction available only to those privileged enough to pay very high prices for chic newly built or renovated spaces, with construction companies and speculators profiting, the practice repeated by real estate agencies and endorsed by the institutions of state and governance. In order to achieve this the cops do not hesitate to use violence for the benefit of large investors, such as Vonovia SE, ADO Properties SA, Deutsche Wohnen, Pears Global etc. The establishment of red zones, militarized security tactics and surveillance are the means used to prevent us from moving freely in our neighborhoods. Approaching this in an intersectional manner, the relationship between different forms of domination, such as racism, heterosexism and capitalism, affects us in a distinct way.

This manifests itself in a continuous increase of „alternative“ white people belonging to a particular social class in the demographics of certain neighbourhoods. This process has been seen in the past in some parts of Kreuzberg and Neukölln. These transformations are legitimized by a discourse that portrays Arab, Turkish and Kurdish working class communities as a „social problem“ for the city, pointing to them as „the Others“ and making up excuses to displace them, while at the same time failing to question the poor living conditions they have to suffer in consequence of the gentrification process. This shows the relationhip between racism and gentrification. The connection with patriarchy is also revealed when gentrification negatively impacts women and LGBTQI+ people. An example of this can be found in Liebig34, an anarcha-queer-feminist houseproject that was existed for 30 years, and where 40 people were living. While the city government presents itself as welcoming to the LGBTQI+ movement, with annual celebrations for Christopher Street Day, Liebig34 was evicted on October 9th. This strategy is called pinkwashing; while attempting to impose an image of LGBTQI+ positivity for their own benefit, the government at the same time destroys one of the city’s most important anarcha-queer spaces. This is one of the most powerful tools of capitalism; anti-authoritarian and anti-capitalist social struggles are digested and integrated by the very mechanisms they set out to fight, leading to meaningless reforms while defanging any threat to government and presenting a liberal, omnibenevolent picture of capitalism.This marginalizes us, depriving us of the social aspect of our neighborhoods, and for this reason we are filled with rage.

Because yes, gentrification is stripping bare our neighborhoods of their previous social character: places where capitalism, racism and patriarchy are questioned and where we, who share common social and political ground relate and connect networks for self-organization and solidarity are dissapearing. Instead, new forms of space are created, with consumerism as their central purpose. This is what happened with the eviction of Ohlauer Schule in 2018, a vacant school that was first occupied in December 2012 in order to house homeless refugees camping on Berlin’s streets. Or even with the eviction of Syndikat, a collective bar that was evicted in August 2020. This is what they tried to achieve in July when the houseproject Rigaer94 was raided again, and vain attempts to evict squatted flats were made without any success, since all flats were protected by the people inside or shortly reclaimed. This is also the reason why the autonomous youth center Potse, the collective bar Meuterei, and the Wagenplatz of Køpi are currently threatened by imminent evictions. This phase of expulsions could well become the biggest attack on the autonomous infrastructure in Berlin since the 1990s. Against the odds, collective spaces have chosen to stay and fight back in different ways.

The state measures adopted to deal with the Covid-19 pandemic have seen an extension of repression, policing and surveillance. This reinforcement of statist coercive mechanisms increases nationalism, and has strengthened far-right and neo-nazi movements. They now use the COVID-19 situation in service of their nationalist and populist discourse to win more and more support from people of a diverse social and political spectrum. They are being supported by media and institutions who give them the space to do it, something we see as dangerous because of the way it fortifies the racist and antiziganist speech used by neo-nazis and the far-right that promotes the total exclusion and marginalization of some communities. At the same time, the autonomous movement has come under constant attack through the eviction of its infrastructure, with gentrification manifesting itself in an attack on marginalized and struggling parts of society. Capitalism, through the state, is intensifying its attack on people -through laws such as 129 for criminal organization- targeting those who are organized against the system as well as far-right and neo-nazi discourses.

Moreover, we see how during the current pandemic, evictions do not stop. This, in many cases, deprives people of the only spaces where they could feel safe, let alone give eachother the strength to be dangerous together in the face of their opression. Once again, BPoCs, women and LGBTQI+ people, the homeless, the unemployed, people with precarious employment or people with functional diversity are being affected the hardest by these capitalist practices. This doesn’t mean we stay isolated. We have our self-organized support networks and we fight to destroy this system of power, oppression and dispossession. We are prepared to show our teeth and claws to those who want to drive us out of our spaces and homes. For all these reasons we call, on October 31st, to fill the streets of Berlin with an empowering demonstration. Let’s all take over the streets. All forms of expression of anger are welcome, except those that include any kind of discrimination.